From PICAXE to Arduino 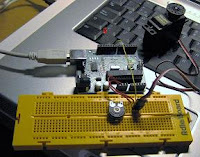 
This issues forced me to find another framework, and I found it: Arduino. This is an open source project implemented over an Atmel microcontroller and that supplies almost the same tools as the PICAXE and even more because Arduino address all the PICAXE issues perfectly:
Another great advantage of Arduinio is that there is an Spanish provider placed in Zaragoza, Libelium. And the price is definitely a good one bearing in mind all the features supported by the USB board.

As all open source projects, it takes some time to configure the software, and even more time if you are trying to set everything up on Windows Vista. The main issue I faced was:
Result: After two nights working on Arduino, I´ve already have the code with the same features of the one I used to have with PICAXE and with better performance. Currently I´m very satisfied with this new option.
Posted by henhaochi at 2:53 AM

Email ThisBlogThis!Share to TwitterShare to FacebookShare to Pinterest
Labels: Electronics